Mrs. Telma Ferreira concluded her degree in Law in October 2005 in the Faculty of Law in Coimbra University.

She became a member of the Bar Association in November 2011

From Mai 2006 to September 2008, she was a lawyer in Romania integrated in the Martifer group to render legal advice  in the areas of group activities, such as the area of renewable energies (solar energy, wind energy, biodisel, small hydro power stations and agriculture), contruction of metalic structures, retail, international and corportate law.

In October 2008 she began her internship in the Bar Association.

She did an  internship in the city of Cantanhede, Portugal, with Mr. Joaquim Gaspar Mendes

She acquires her professional license in October 2011..

In January 2009 she starts her job as a specialist in operational risks with the Efacec group, integrated in the department of  the Risk Management group.

In December 2012, she integrates the juridical department in the Efacec group as an In-house lawyer, with the following responsibilities and functions:

Person in charge of the management of Intellectual Property rights of the Group (Brands, Trademarks, management and follow-up of all inherent proceedings) and of the juridical support to the areas of risk management and information systems.

Since June 2014 she started Fa-LegalOnline. 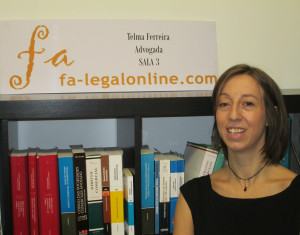